I am not quite sure where to start. I am overwhelmed by the sheer volume of historical facts, architectural nuances, legends, Fransiscan memorabilia, views, impressions, stories from Gubbio, churches and monuments, all cascading in on me over the past 48 hours, that I am still sorting it all out in my head and trying to make narrative sense of it all. And somehow fit it into the context of my walk. 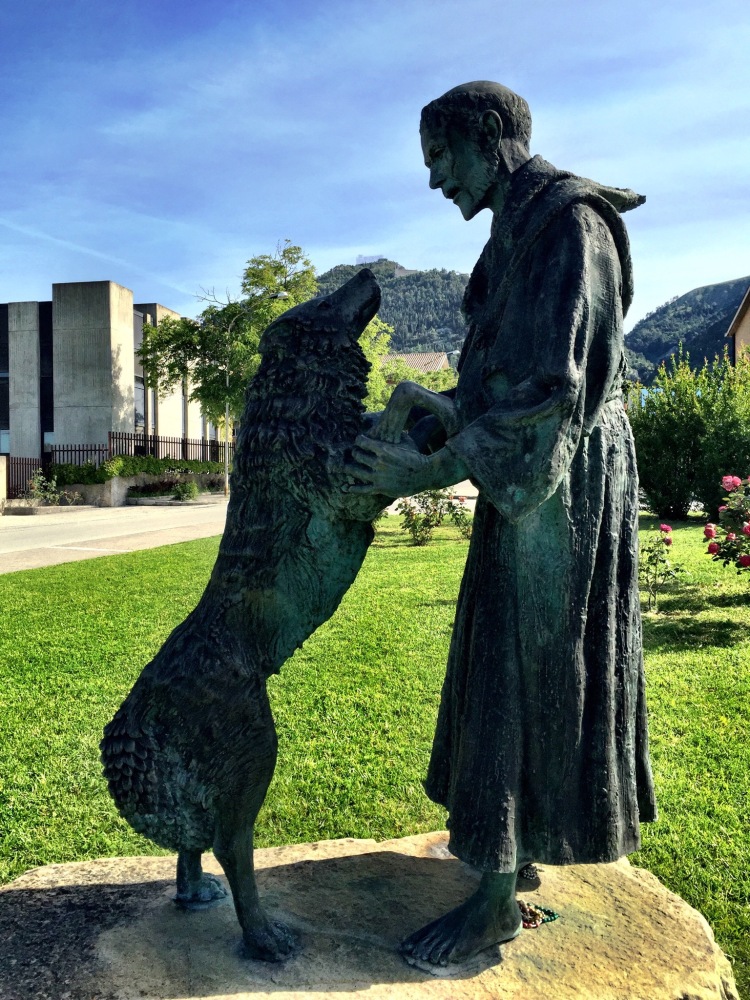 Francesco and the wolf

So perhaps I should deal with the walking bit first. The trail from Gubbio to Assisi is probably the most sacred of the whole path. St. Francis didn’t actually walk the length of the St. Francis trail at any point in his rich and varied life, but it is undisputed that he did, in the winter of 1203/04 – by all accounts a brutal and desperate winter – escape from his confinement in his father’s house in Assisi, with only the cloth on his back and sandals on his feet, and walk the 45 odd kilometers to Gubbio. This journey which took him the best part of two months, with a few stopovers to prevent him from freezing or starving to death, is well recorded and the trail today follows his footsteps as accurately as possible, given the passage of the foregone 813 years. And indeed there is something, an aura or mystic about this section that renders it palpably different from the previous sections. These woods seem more intense, the silence more soporific, the trail underfoot more ancient and aware of the very special passenger it carried all those centuries ago. 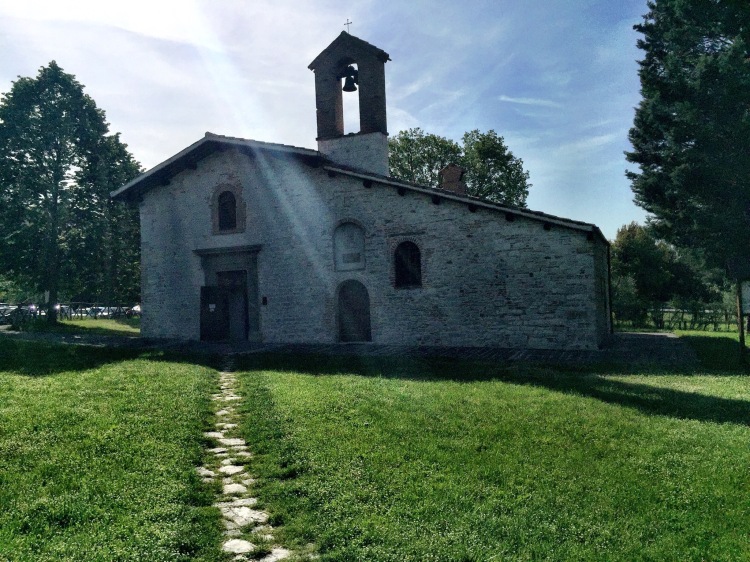 And it was in Gubbio that Francis found shelter and protection from the wrath of his father and the elders of Assisi, which he had evidently provoked, through his distribution of the proceeds of his father’s business to the poor (an act that would have any business owner explode in fury), his complete rejection of his inheritance and indeed all his worldly goods in a celebrated renunciation act before the bishop of Assisi and assembled patriarchs and his determination to establish a radical order based on a closer community with nature and the original spirit of God in a life of distinct anti-materialism and in an ethos that celebrated all life and treated it as essentially one. His was, to coin a more recent phrase, the first fully inclusive organisation.

So Gubbio became the base for his start-up and he established himself here very quickly. His first church, the simple, but wholly beautiful Chiesa della Vittorina, which was gifted to him by the local bishop Vittorino almost immediately on his arrival became the cornerstone of his movement. The heart of the Fransiscan presence in Gubbio is the much larger church of San Francesco della Pace, built on the site of the place of business of the family who originally protected and supported him. Francis’ vision must have been extremely attractive, because in less that 5 years (or so) he had already attracted over 5.000 adherents, many of them young men from wealthy families, who found his message of a simple life, free from politicking and money-making in service of the poorest, irresistible. Gubbio became, therefore, the city of the underdog, making an independent decision on the merits of the case probably in the face of high displeasure from the bishop of neighbouring Assisi. All of which makes the town even more ‘sympathisch‘ in my eyes.

View of Gubbio from the trail about 8km away

The trail from here is magical, there is no denying it, but at the same time there is no denying the fact that after 14 days on the road without a break, my feet are feeling as if they have been tenderised with a schnitzel hammer and my little toe (right side) does not bear much resemblance to my little toe (right side) pre-camino and is hurting not a little. Added to which, the temperatures are creeping up – the needle hit 35•C later on this morning – with no cooling breezes and significantly less protection from the sun through woodland than on previous stages. In a word, I am trudging my way across these last kilometers before we hit Assisi, thankfully relieved of my backpack, which I have stored in the hotel, but handicapped by feet which are dying for a rest and some TLC. 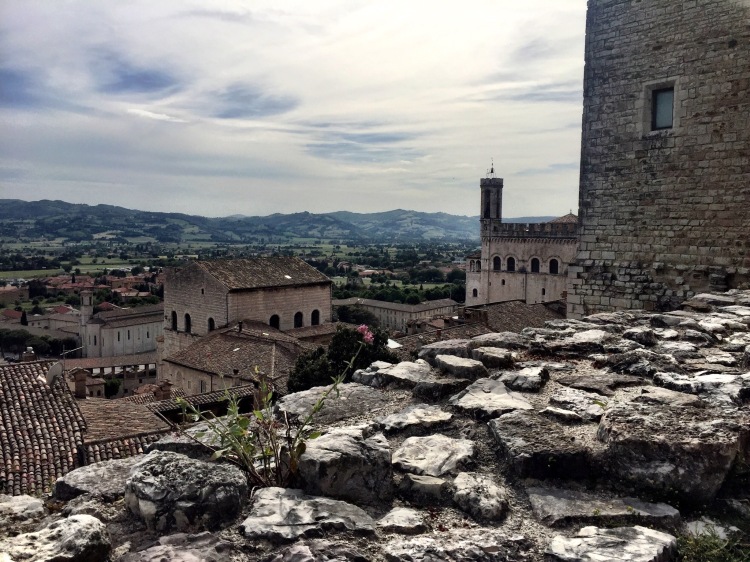 I did manage to hobble around town yesterday for two hours in the company of Valentina, an art historian and my personal guida, who the hotel were kind enough to organise for me. My purpose, as I explained to Valentina, was not just to tick off the various sites and monuments so that I could cry Bingo! at some stage in the evening, but to understand how the town had evolved and maintained its architectural integrity for almost 1.000 years. 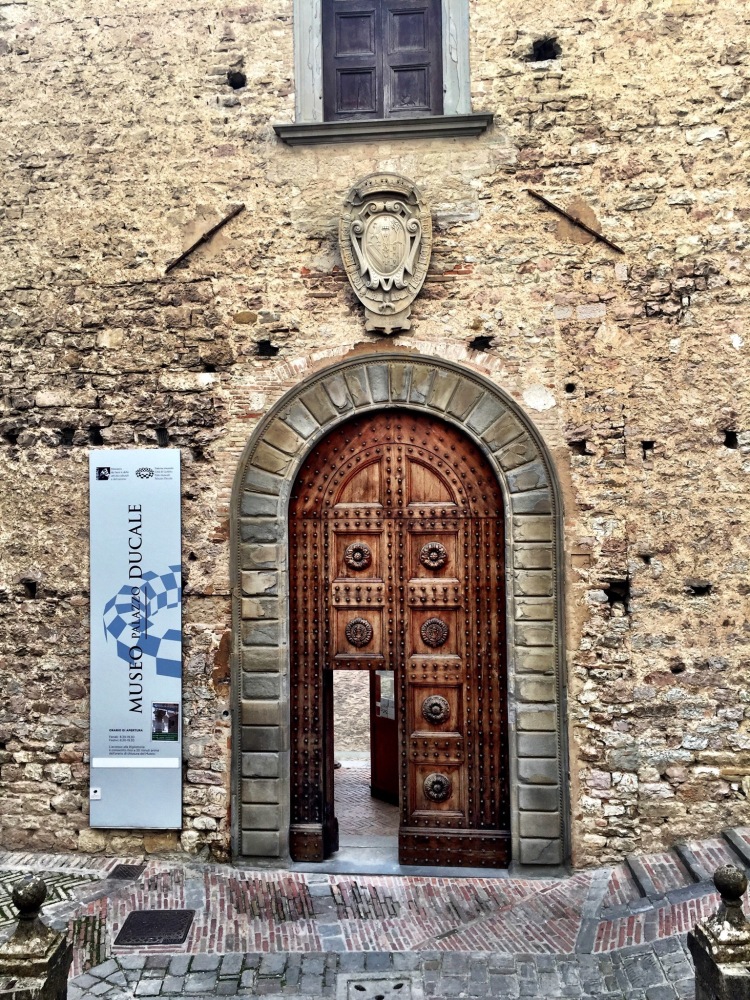 Door of the Palazzo Ducale

It appears that Gubbio was always wealthy and important, not just because of its location in a fantastically fruitful valley, but also more importantly as a production centre for aggregates, cement and bricks, hugely valuable commodities in roman times as the empire needed roads and buildings in vast quantities to keep the lines of supply and of communication functioning. Indeed Gubbio’s wealthiest citizen and a generous patron is the owner of the large cement production facility just to the north. The town, I discovered, was built from top to bottom, with the first settlors being the ancient Umbrians, who constructed the initial primitive fortification around their settlement, about halfway up the mountain which forms the backdrop to the town. When the Romans settled the town, they had no need of elaborate fortifications, as the entire area belonged to them anyway and the town spread rapidly downhill and into the plain below, without any city walls. Who was going to attack them there? The ruins of the amphitheatre, (built around 200 BC) evidently the second largest in the empire, set well outside even todays city limits, is a testimony to the peaceful security the town enjoyed under roman rule.

That all changed, of course, with the demise of the roman empire and the shattering of that security as Langobards, Goths and neighbouring states picked over the receding territories of the roman state. Gubbio retreated behind newly built fortified walls, as was the fashion in the middle ages and these are still mostly preserved today. Gubbio bloomed in the time of the Segnori, the time that also saw the rise in power of cities auch as Florence under the Medici or Milano under the Benedotti amd Sforza patronage. Much of the towns architectural magnificence is due to the enormous prestige accorded to the places of Governance by the elders of the town, here called Consoli, and to their rigorous focus on trade. The medieval palazzi of these wealthy merchant families are, by and large, entirely preserved for posterity, making Gubbio one of the most complete and well-preserved medieval cities in Italy and therefore the world. The only word for it is breathtaking.

The scope for enlargement, given the geographical limitations of the mountain on and up whose side the town is constructed, also meant that any future rulers wishing to impose their decorative taste on the city, had to be very creative in doing so. Space is limited and at a premium here. The best examples of this are the new Ducal palace built in the renaissance style by Frederico Montefeltro (he of the famous nose, disfigured by a sword blow which chopped off the bridge of his hooter) and plonked onto the garden of the cathedral as well as a few other houses, whose cellars and stones form the foundation and the Piazza Grande, which is literally suspended on a platform of arches between the Palazzo dei Consoli and the Municipal Palace, in a mind-boggling feat of engineering.

This piece could easily turn into a 10.000 word encomium on the delights of Gubbio and perhaps I will pen that sometime soon: Suffice it, at this point, to say that this city is full of surprises and, given its relatively compact size, equally full of quiet corners and islands of peace, such as the Via della Camignano, built on a stretch of water specially diverted from the main river to provide water to the guilds for their production and the little visited Parco de Ranghiasco, constructed on a series of terraces, just below the cathedral and which today contains a few modern sculptures and a magnificent arboretum, providing peace, shade and tranquility a few minutes walk away from the busy centre.

I have quite fallen in love with the place, which has the added attraction of being seriously under-marketed (200.000 visitors pa. compared to Assisi’s 7 million pa. and the two towns only 35 kms apart. Go figure) and still pretty much undiscovered. Even if all the faithful readers of my blog were to descend wholescale onto Gubbio on the same weekend, you would probably all still be able to move around pretty much unencumbered and find a decent hotel room.

Fontana dei Matte – Madmans fountain. If you walk three times around the fountain and wash your face three times in the water, then you have a license to behave like a madman for a day… 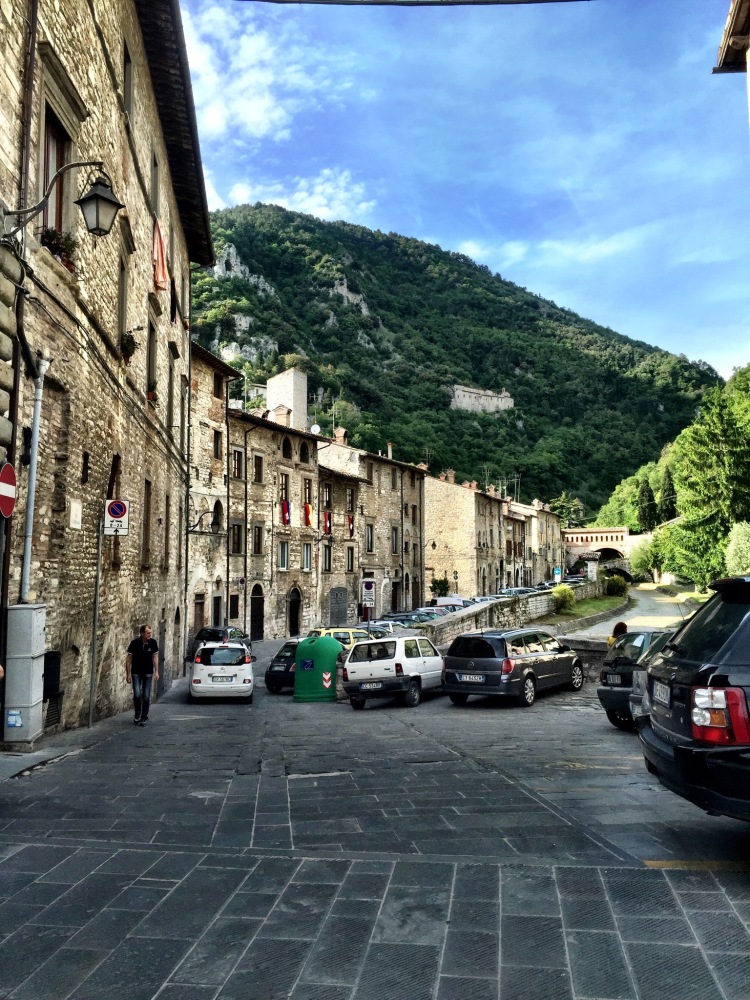 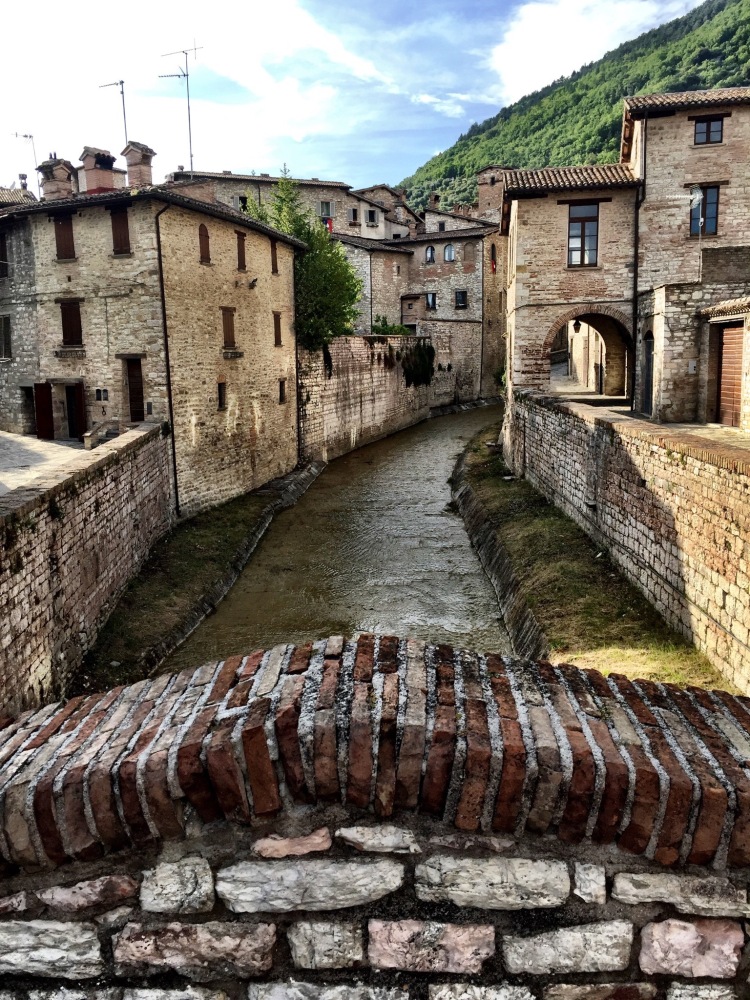 Camignano district – for my money the prettiest part of town

The Church of St. Ubaldus, Patron St. of Gubbio, visible at the top of the mountain.

The wolf in the crypt in which the real Lupo from the St. Francis legend is interred 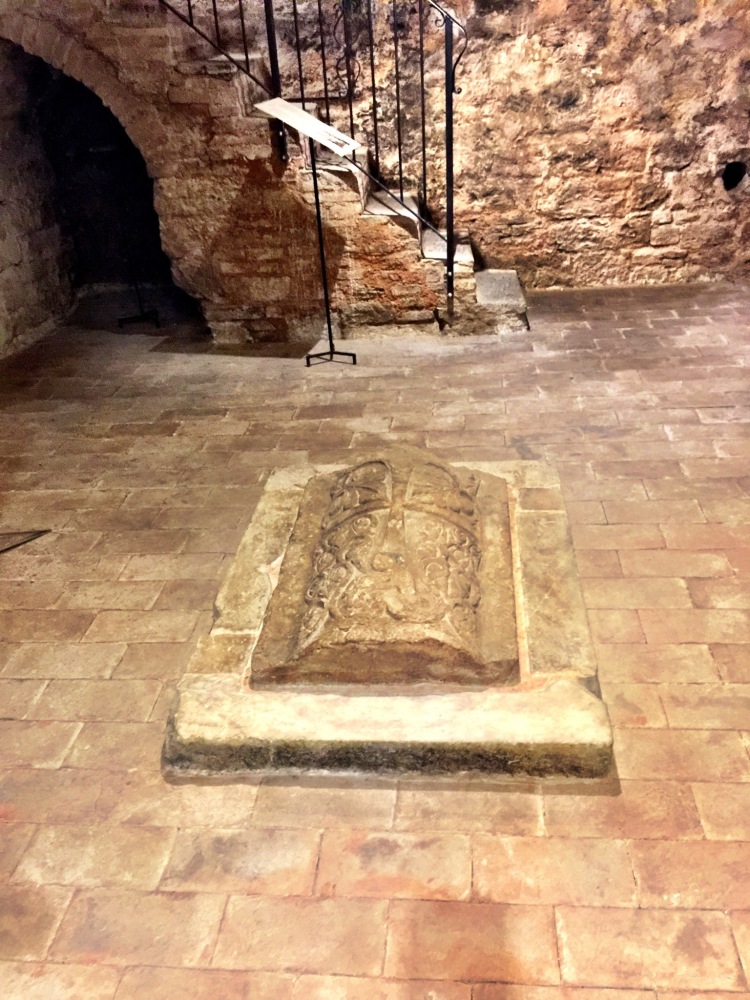 The grave of St. Francis’ Lupo 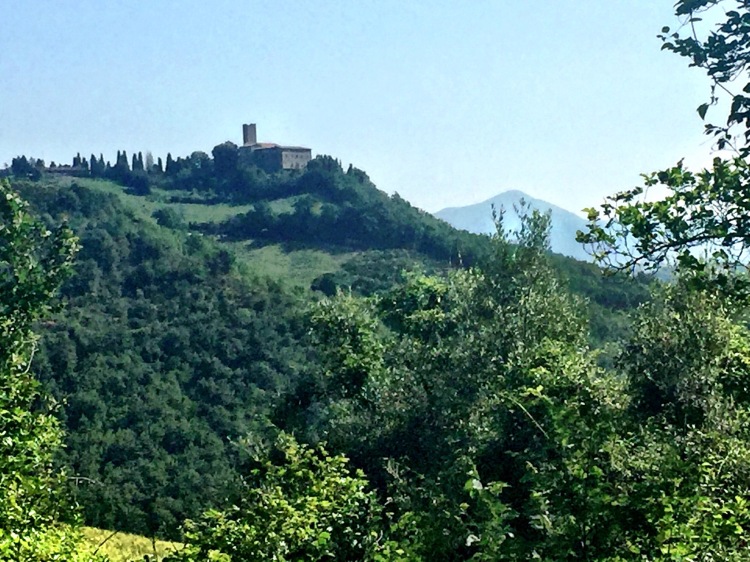 A distant castello, perched dramatically on the hilltop ahead of me 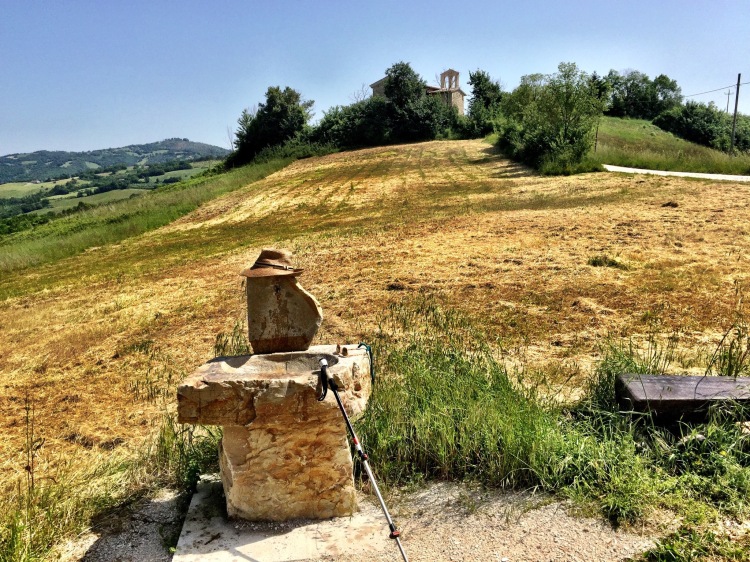 A much needed fontana, working this time just by Coccorana, wearing my hat and glasses. The temperatures had by now risen to some 35•C 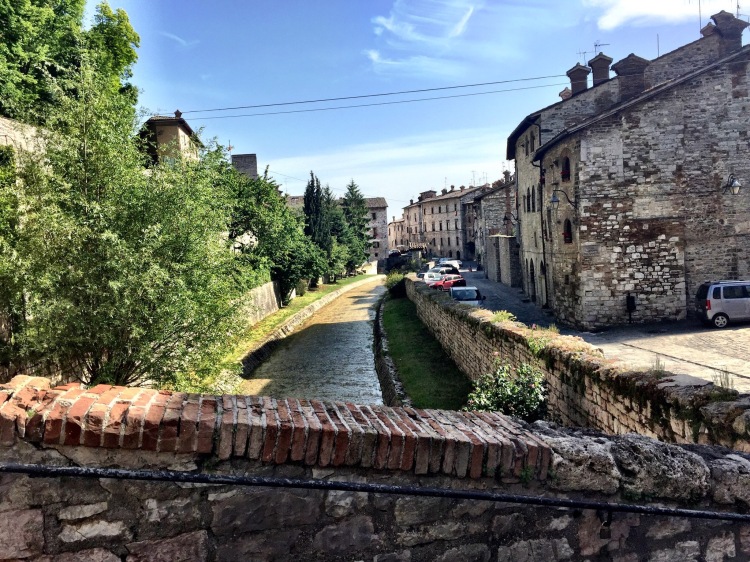 Rested, washed and back in Gubbio: my favourite end of the city, Via di Camignano away from the crowds and the bustle 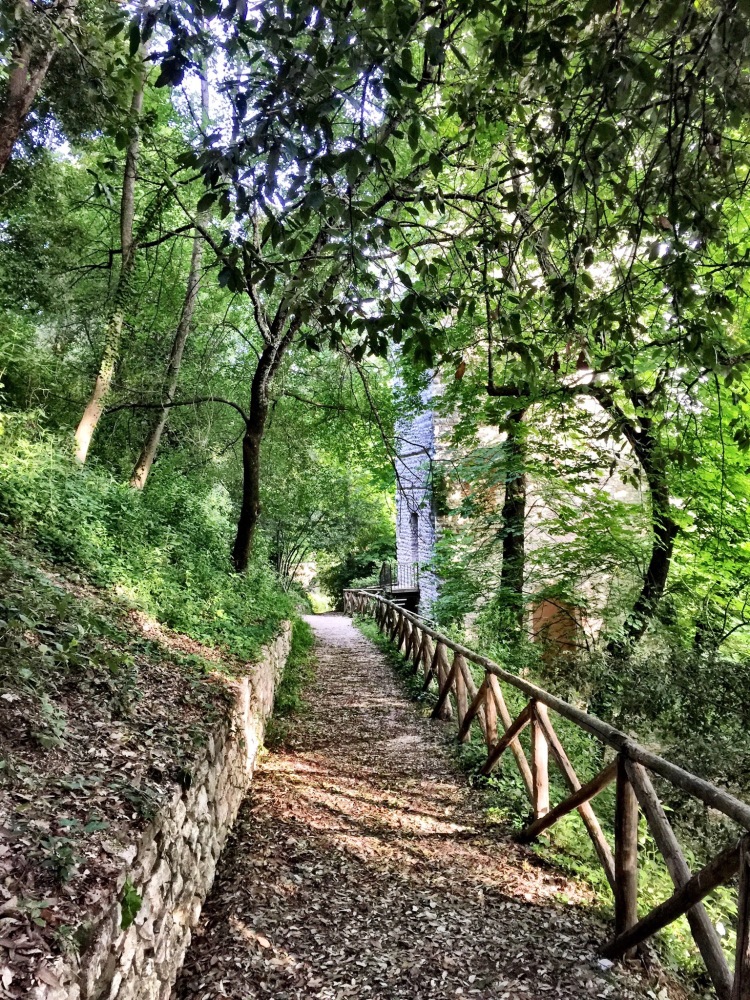 3 thoughts on “Gubbio to Valfabbrica and back again”