A short, strenuous and deeply enjoyable walk today from the minuscule village of Camoldoldi over the hill to the romantic hillside village of Badia Prataglia. My guide informed me that today’s section was only 8km with approx. 500 em., all of those meters to be confronted in the first three kilometres. Thereafter a fairly flat walk across the top of the mountain and then an approx. 450m drop to Badia Prataglia on the other side. The suggested time for the walk was some four hours, but even with an extra 10kgs of weight I wasn’t sure how it would be possible to execute such a short distance in more that 2,5 hours.

Knowing that it was going to be a short – whether 2 or 4 hours remained to be seen – walk, I decided on a leisurely start and a long breakfast in the delightful bar of the I Tre Baroni, who couldn’t have been more helpful or friendly if they tried. Nothing was too much trouble for my host and, surrounded by the products from the next door monastery’s artisan workshop, La Vecchia Farmacia, such as honey and chocolate and jams and candles and cakes and even home made ice-cream, I luxuriated in having time for an unrushed breakfast before setting off into the bright sunshine for my jaunt over the hill. 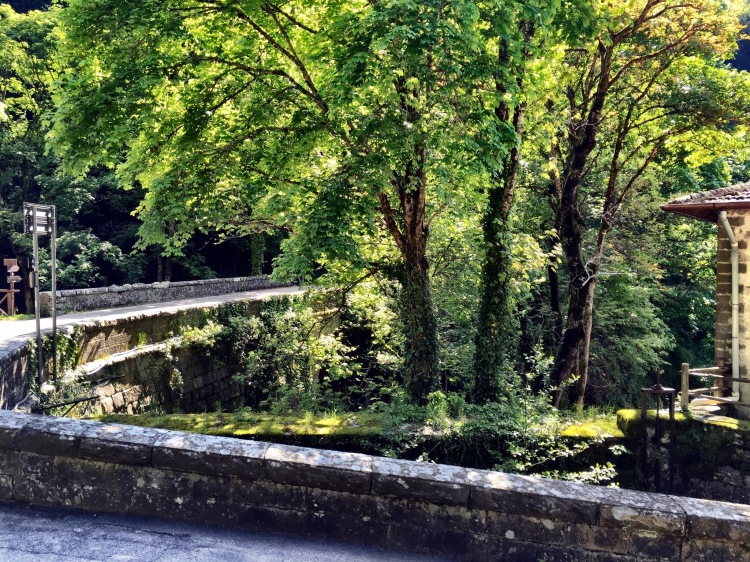 The bridge at Camoldoldi at the start of today’s walk

The walk was lovely – the forest comes right down to the edge of the village and just after crossing the ancient stone bridge at the entrance, a stony path emerges that appears to rise vertically up into a dark mass of pine trees. This would have been very challenging if my breakfast had been a “Full Irish”, but Italians don’t do breakfast (well, not what we would recognise as breakfast), and my tea and small panino were not much of a drag on performance over those first few hundred yards.

The trail climbed steeply and relentlessly over the next four kilometers with hardly any respite, as it snaked through the dense, shadowy pine forest. A sign told me that the forest was called sacra foresta or sacred forest although it felt more like a foresta timorifica. The ascent ended abruptly at 1.200 m and the levelling out was accompanied by an immediate change of vegetation. 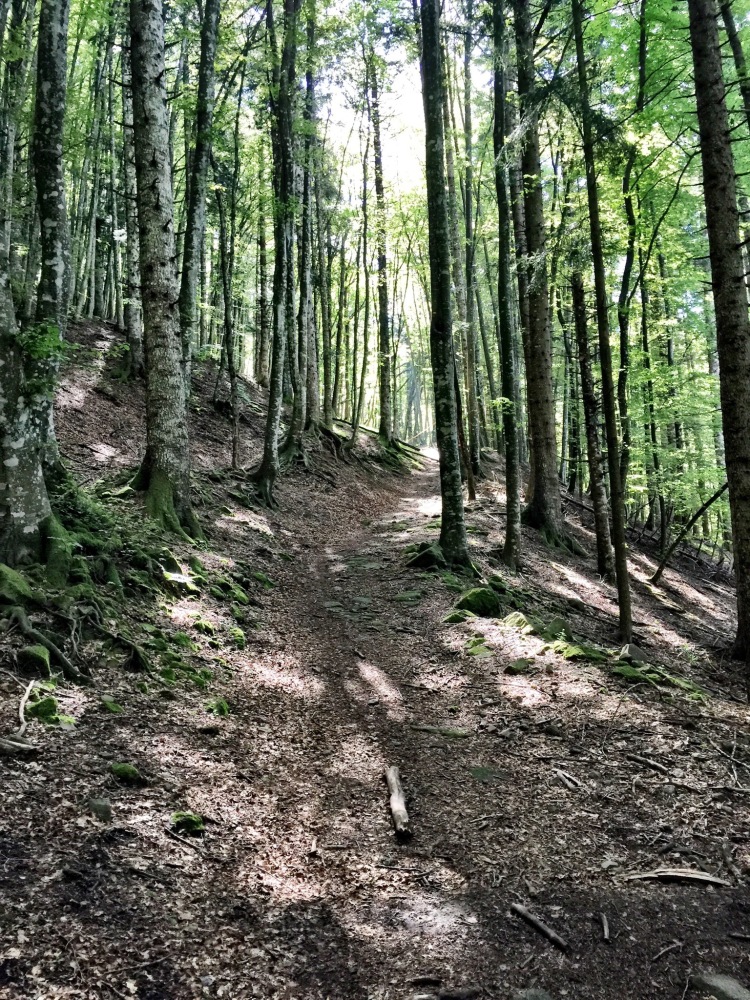 Up through the foresta sacra, a long steep pull up to 1.200 em, through a dedicated pine forest on this northern side.

On the north side of the hill that I had just marched up, the forest was, as mentioned, entirely coniferous, consisting exclusively of monstrous gangly pines, their bare stems rising up like so many mikado sticks into the light a huge distance above, their bushy tops blocking out almost all the sunlight. From the flattish top of the mountain, all the way to the village on the south side, the wood was exclusively beech and deciduous, which made for a dramatically different light and texture. Gone was the dank, dark foreboding of the previous ascent, to be replaced by a vivid lime green explosion of light, filtering the late morning sun (it was now 11 o’clock, having started at 10 on the dot) and suffusing the trail with a rays of sunshine. Also from having no views other than the endless rise of wood and mountain flank on the north side, this southerly aspect of the walk gave me regularly teasing glimpses through small breaks in the trees, of the hills rolling out in front of me and presumably a taste of what I could expect on tomorrow’s long haul to the mountain abbey of La Verna.

The view across to La Verna tomorrow’s challenging stage to the ancient abbey.

Given that I was making such good progress – this whole section was going to be put to bed in under 2 hours at the pace I was clipping – I chose a shaded spot on an outcrop with a breathtaking view to break open my thermos of tea, prepare a fresh focaccia with the remains of my tomato, pecorino and parma and some of the monk’s chocolate that I had bought from the bar earlier that morning. These moments – as I have written before on so many occasions – are what this walking lark is all about: alone, body alive from a few hours morning walking, between a safe harbour left in the morning on the way to who knows what, immersed in endless countryside, accompanied only by birdsong and the thoughts in my head, and a cup of hot tea in my hand, gaze drifting out over a distant horizon or back over the path just taken; moments of deep peace and gratitude: for the ability to make time for such a journey, for the constitution that allows me to attempt it, for the ability to savour and enjoy every minute, for the gifts to each of the senses, in sum, for the sheer pleasure of being alive on a beautiful planet and being lucky enough to enjoy it.

The drop down to Badia Prataglia was an easy walk and done in under 45 minutes. I spent a good half an hour sitting on a bench overlooking the village and trying to calculate my likely route for the next day, figuring that it was far too early to turn up at my lodgings at the Albergo Foresta.

Badia Prataglia, a gem of a village nestled in the crook of the valley in the midday sun.

When I did appear there at about 1230, the landlord and his wife were busy with redecorating two rooms and the house was full of workmen and smelled of concrete dust, for which they apologised and sent me packing off to the village for lunch. I won’t bore you with the details of what became a soporific and lazy day, resting my muscles, which are now changing after four days on the road, or of the delicious dishes of porcini with just about everything (pasta, tagliata, polenta) that I consumed – the warm weather and the recent rain have created almost ideal conditions for porcini and the menus – the heavens be praised – are groaning with them.

Suffice it to say that today felt like a day off and gave me the opportunity to take stock of the trail so far, to rest, wash my kit and prepare for tomorrow’s 8 hour, 1.000 em trek to the fabled Abbey of La Verna at the edge of the tuscan national park. The forecast is for rain and possibly a thunderstorm.