The first day on the trail is always particularly tiring, as the body adjusts to effort of walking for hours at a stretch and to carrying a pack of 12 kgs (plus or minus, more likely plus given the amount of stuff I accumulated from the chemists in Munich). This is now the third time in as many years, that I have taken up my walking stick and set myself the challenge of walking the full length of one of the traditional european trails and I have to admit that todays opening stage was the most difficult and challenging of them all, to date. it was certainly the most dramatic, both from the perspective of the profile of the walk as well as that of the weather. One consolation is that I am not feeling as knackered as I was on my previous first days, although whether that is due to the fact that this section was not quite as long as the previous two (both roughly 34 kms compared to today’s 21 km) or to the fact that I have been taking a magnesium preparation over the last days, that prevents cramps and muscle fatigue, I am at a loss to know.

Fact is this stage, which took me from the train station in Sant’ Ellero, a hamlet some 28kms east of Florence on the road to Arrezzo, runs in a more or less straight line, from the bottom of the valley to the top of the mountain range which dominates the skyline to the south, encompassing 1300m of elevation, without let up over the first four hours of the day. The train station was always going to be my starting point, as I had intended to take the 0718 train from Florence to Sant’Ellero, a journey of no more than 25 minutes for the price of €3,50. My aim was to get on the road by 0800, being unsure what sort of terrain I was going to be confronted with, but wanting to avoid the long slog uphill in the midday sun. I was comfortably settled in my practically empty compartment, fresh tea and a croissant cioccolata on my lap, when the conductress (female conductor?) passed through asking the few passengers individually where they were proposing to travel to on this train. When my turn came to be quizzed, I responded Sant’Ellero, expecting at worst to be informed that I was in the wrong half of the train, but not that, scusati, we would not after all be stopping in Sant’Ellero, but there was another treno in two hours at 0915, maybe.

Faced with a two hour wait resultimg in a 1000 start and the prospect of being baked within a further two hours, I dashed out, engaged a taxi, gave him his instructions and waited to be sped off to make my 0800 start. My driver had other plans and needed to assure himself of the whereabouts of Sant’Ellero (which having been there, I can forgive him for not ever having heard of) by consulting with the three other colleagues waiting at the rank. This was obviously the more congenial method of research, than just punching in ‘S. Ellero’ in his fully functionally TomTom navigation aid next to his steering wheel. He didn’t return brimming with confidence, so I engaged the services of the lady with the rather irritating voice who Google have programmed into my app to ensure that we were indeed heading in the direction of the Sant’Ellero, that I wanted us to arrive at. She and he then engaged in a running commentary of the route and possible alternatives (there aren’t any), he using me as his involuntary mediator, so that I was well pleased to be shot of both of them, by the time I was deposited on the forecourt of the (tiny) railway station and picked up the first (always hugely encouraging) signage that pointed me in the right direction.

Today’s walk could not have been more beautiful, more strenuous, or more diverse in the range of weather experienced in the course of what was, eventually, a 6,5 hour expedition. The forecast had been for sun followed by rain and possibly a thunderstorm in the afternoon and that is exactly how it transpired: a warm, almost sultry day, with clear blue skies and massive views over the hills below me to the north, becoming closer and more humid during the lunch hours, as I pulled up a seemingly interminable narrow, steep, rocky footpath before emerging, drained and sopping wet, with my pack feeling like a 100cwt, into the cool of the forests above. The rest of the trail was through dense coniferous forests on muddy tracks, clearly indicating that there had been a great deal of rain in recent days and, aside from the fact that my back, or rather a specific muscle in my mid back, was making itself very noticeable, this was a delightful walk, with occassional glimpses of the unending hills and valleys, densely forested, as far as the eye could see, as the path skirted the edges of the forest. 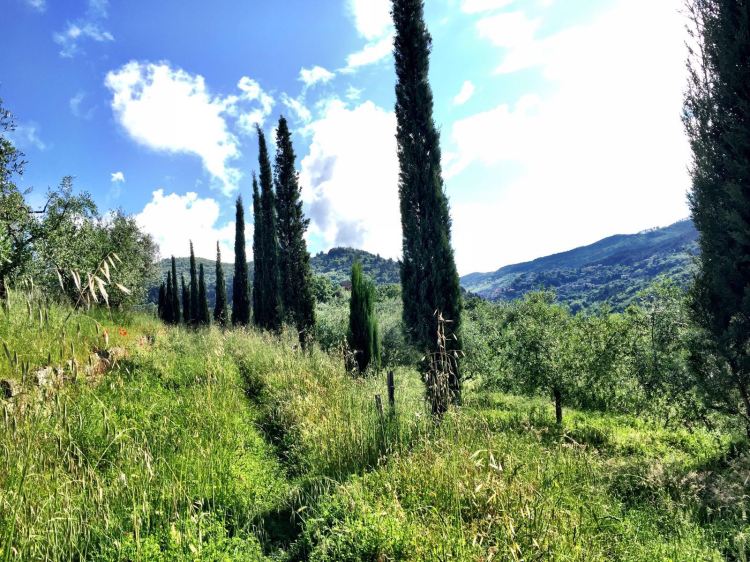 I made an involontary detour, thanks to some idiotic signage, which cost me a good hour altogether and meant that I was not, as I had planned, safely esconced in my Albergo by the time the storm hit, as it had been threatening to do since lunchtime. Instead I had about 30 seconds warning, fully exposed on an open stretch of track in a large clearing in the forest, before the full force of a torrential rainstorm made it’s presence felt. Living in Ireland has at least given me plenty of practice in getting waterproofs on man and pack in about 30 seconds and I was fully kitted out and marching on as the rain came down.

And did it ever come down: the italians have obviously been taking lessons from the irish in how to do rain, as the next hours performance would have been immediately recognisable in Killarney or Skibereen. It was piaggioing it down to such an extent, that it took about 10 minutes to turn the footpath into a mudbath that extended all the way into Consuma and home for the night. 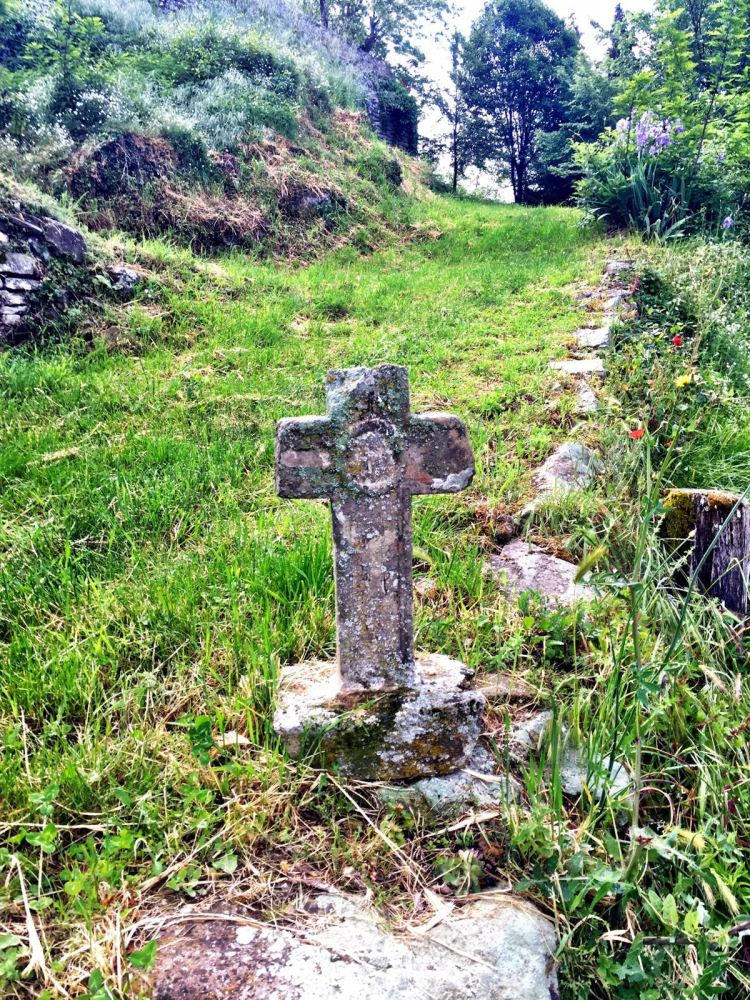 Delightfully welcomed, furnished with tea and a world-beating crostata, my host made every effort to ensure that I was quickly settled in front of the open fire and given ample time to dry out, steam off and regain a semblance of mobility in my tired limbs. I am loving being back on the road again and, knowing that the longest uphill stretch is now behind me am looking forward to some gentler walking over the coming days and enough energy to appreciate my surroundings rather than struggling just to pass through them.