First 55km of the Wicklow Way now under my belt: 80 km to go, of which 30 will be ticked off tomorrow between Iron Bridge and the glorious Glendalough, another 30km on Saturday, as I walk home to Greystones and the final 20km from Glencree to 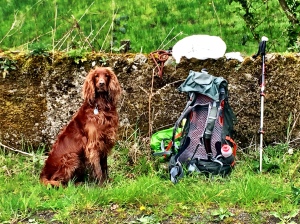 Marlay Park on Sunday. The last two days have been intense ones in very mixed weather, some sun, mostly clouds, wild and blustery winds yesterday and the occasional drenching downpour, although never for long. I have become singularly adept at changing into and out of my waterproof outer layers and at deftly peeling layers of clothing on and off in a matter of seconds, and what two weeks ago was a constant irritation, has now become a routine wardrobe adjustment that I hardly notice. Great thing, practice.

The terrain from Clonegal – winner, I am reliably informed, of last year’s prettiest village in Ireland award – at the official start of the Wicklow Way was on gently and then aggressively rising roads for the first six or seven kilometres and then a splendid passage through the 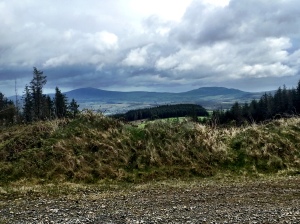 first of two forests which took me over the first hills of the Wicklows and onto the storm-blasted tops. There were some heart-pounding pulls up grassy tracks as the Trail began demonstrating the steep climbs for which it is famous and at their summits spectacular views of the country I had passed through in the last days behind me. Brandish Hill and Mount Leinster were on full view, this time from the reverse perspective that I had enjoyed on Tuesday and I recognised my current hill as being the one I had looked across to only a few days previously.

As so often over the past weeks, the forest and woodland sections of the trails, usually over or around hills or mountains, are relatively short interludes to the longer sections of road connecting the valleys or running along them and need to be savoured for their 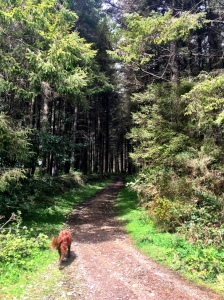 gentler treatment of feet and joints. The route from Clonegal to Stranakelly, where Matt and Anne’s Lugnaquillia View B&B is situated, is perhaps half track and half road, but the trail today was much better proportioned, with only about 30-35% of the trail on metalled surface. This is an important statistic, as the quality of walking is significantly determined by how much time you have to spend pounding the tarmac: the more and the longer, the greater the pressure on feet and knees and the greater the overall wear and tear. Today’s route was glorious and just the sort of walking I had been hoping for on this section: miles of field tracks over steep hills, sweeping views of the Wicklows, as they slowly unfurled themselves before me, becoming deeper, higher and broader with every new valley traversed, as we headed ever closer to the big boys of Lugnaquillia Mountain and Corregaslegaun, whose sides we will travel across tomorrow. There were a few mighty pulls up long grassy tracks – one in particular I was waiting to experience as it shown as a vertical line across such tightly spaced map contours, that I could only imagine the ascent to be vertical. It wasn’t of course, but only just. 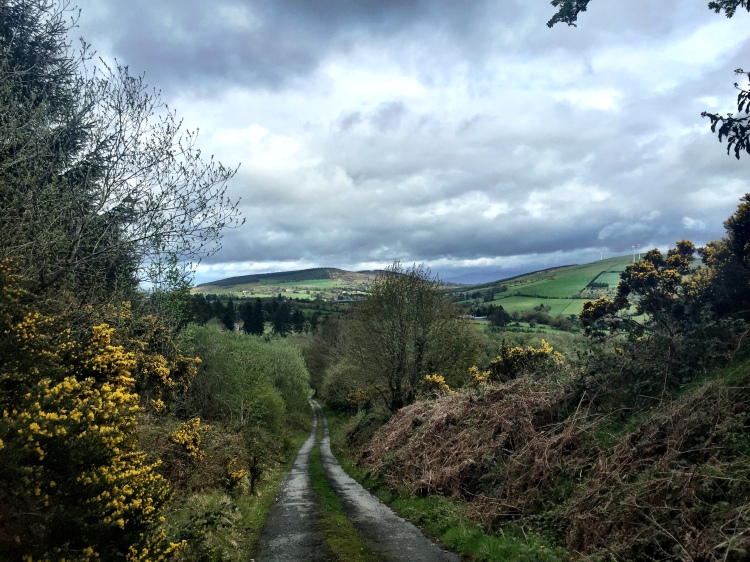 I enjoyed two conversations along the road today: one, with a farmer whose land I was traversing on Ballycumber Hill, who informed me, when I told him that I had been walking from Waterville, that he had imported his best lambs from a hill farm behind the lake there (of which I had a photograph from my first day’s walking) and that this breed were particularly hardy and 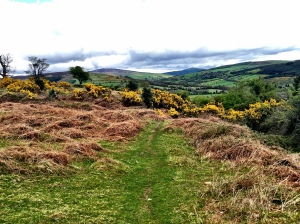 easy to handle. The second conversation was with a group of walkers on the far side of Moyne, one of whom, an elderly gentleman, took great delight in telling me, on hearing where I had started my journey, that his wife was born and raised in Waterville. He was not a little surprised when I told him that she was probably very hardy and easy to handle. He had to think about that for a minute before repyling, that indeed, on balance she was, but how the devil did I know that. I could only smile knowingly 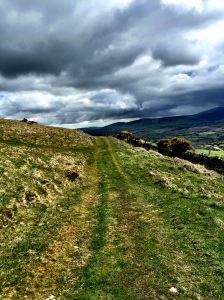 and hint to him that one learns a great deal from travelling a country on foot.

Today’s tour ended after six and a half hours at a place called Iron Bridge, exactly 30km from Stranakelly. The ascent tab for the day came in at 1.234m which is more than third of the stated 3.200 for the whole Wicklow section. My guess is that we will have at least 1.500m tomorrow, which doesn’t leave very much for the final 50 kms. Either that or the official stats are erroneous. Iron Bridge was one of the locations that had embedded itself into my consciousness from the first moments of planning the trail and reviewing this section on maps and trail guides. 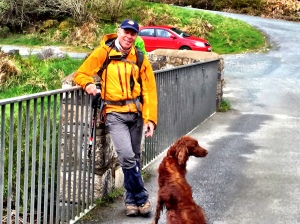 I had conjured up visions of a magnificent iron bridge spanning a chasm with a thundering mountain stream surging down the gorge below, a scene befitting the name and the importance of the spot as a marker on the Wicklow trail. My disappointment was therefore commensurate to the discrepancy between the size of the bridge in my imaginings and its dimensions in fact. To be honest, one blink and you would not even notice you were crossing a bridge at all, let alone remark upon the fact that there was any more or less iron used in its construction than any other piddling little bridge across a small, tranquilly flowing stream. Another notch on the scoreboard to reality and another nulle points to my preconceived notion (making the score right now look like FC San Merino versus FC Barcelona at half-time). 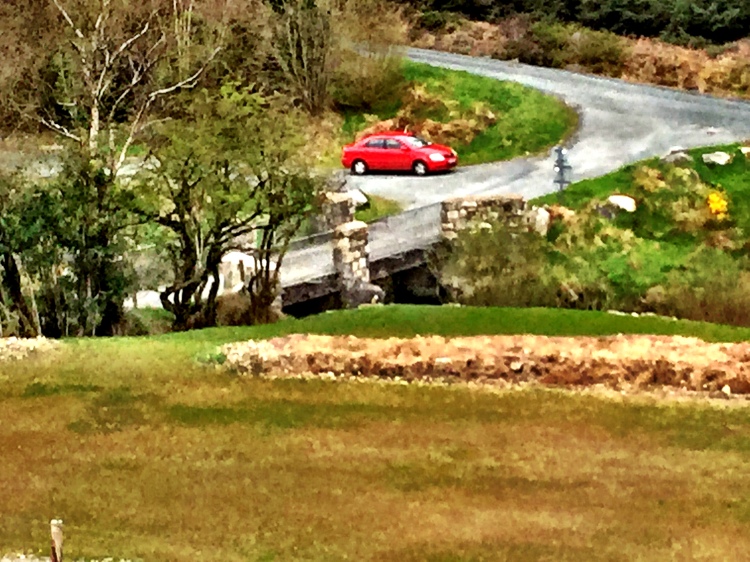 Matt – angel that he is – was waiting to pick me up on the track just up road from Iron Bridge and drove Stella and me back to Stranakelly for our well-deserved tea and fire and biscuits. Both Stella and my kit were in urgent need of a complete hose down after our many kilometres of tramping through mud and cow-muck. Dog, boots and chaps are now drying in front of the fire, we have been fed on Irish stew and mashed potatoes and there is nothing more to do 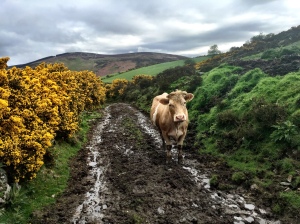 with the day other than keep awake long enough to see the first results of the UK election coming through and hope that the right party garner enough votes to a) form a working parliamentary majority and b) utterly confound the pollsters who have been predicting a hung parliament or worse.