Friday, May 1st. Swings and roundabouts. One day you are walking on gentle grassy banks along a majestic river in the spring sunshine with a cool breeze on your face, enthralled by the verdant luxury of the surrounding countryside and the next day you are trudging along mile after mile of black tarmac, often along the side of main arterial routes carrying lorries and an endless rush of busy traffic, with a cold, wet miserable east wind pushing against you and a grey menacing sky hanging over your head, threatening worse to come. Feet hurt from the tarmac, the views limited and where they should be, clouds hanging in the valleys. 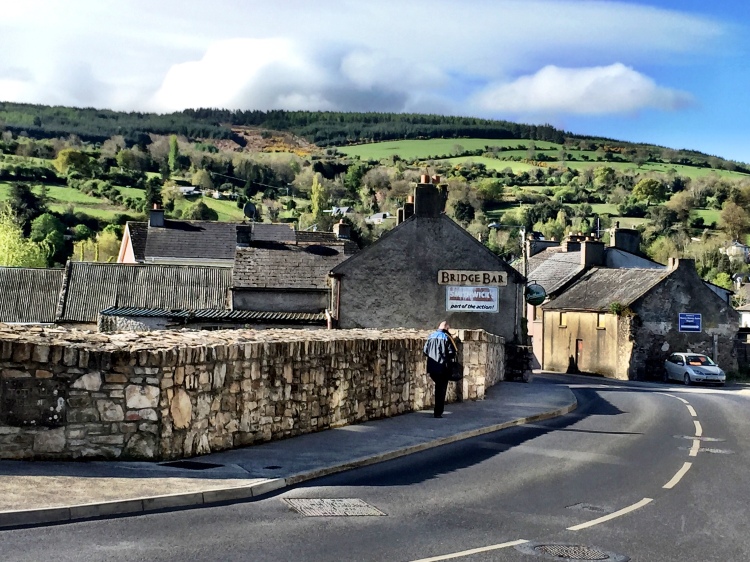 I have been waiting for today or one similar to it. I am well into the third week and, at present rate have about 8 days to go. I am averaging between 25 and 30 kms a day and am walking at an average of exactly 5km/h or a kilometre every 12 minutes. 30 kms translates into 6 hours walking, which with reasonable tea and lunch breaks along the way turns into a 7-8 hour walking day. 10 hours was the most we have managed so far.

To date, we have covered 376 kms which is approx. 2/3rds and I am expecting to take seven to eight days to complete that stretch, which will bring me to Sunday, 10th or Monday, 11th of May, two days earlier than scheduled, but in time for my wedding anniversary on the 12th, which I had set myself as my real target date. I may have to tag another day on to complete the walk to the centre of Dublin, which is a good way from the official end of the Wicklow Way in Marlay Park in the south of the City, but I can do that and still be “in budget”.

I am probably being more than a little unfair on poor old South Leinster, as it is not really its (her? his? their, even?) fault, that the only walking section on the entire trail so far (and by the look of it at all) had to be on my black dog day with probably the most inclement weather of the trip. However, anybody reading the comments on the Irish Trails Website will not be able to overlook the fact that most experienced walkers are seriously underwhelmed by the quality of the walking and the construction of the trails, especially if they are used to fell-walking in the UK or trail walking in the Alps or in Italy. My impression is that Ireland is fairly new to walking and trail hiking as a serious sport and outdoor pursuit and is only really beginning to come to terms with the potential that the great Irish outdoors has, as it were, on its doorstep.

I was expecting much less though. I was expecting to have rotten to non-existant signage and to have to construct my trails with the help of my GPS system and the rudimentary maps on the Irish Trail site. That was my biggest worry and I was sure 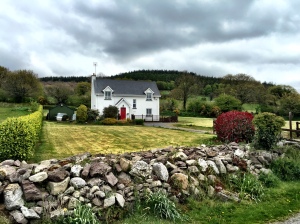 that, before I set off, I would waste hours in losing the trail and having to retrace my steps, seriously dragging down my average speed and distance covered. I had been told to expect this as well by various people who had had partial experience of the routes. It is definitely a load of cobblers, because the signage has been nigh on perfect, failing me only at the start of the Duhallow Way and on the last off-road kilometer before Cahersiveen, that latter slip costing me over an hour at the end of a very long day (the first) and led

to my being macerated by a bramble and gorse thorn attack. Apart from that top marks to the various Trail maintenance teams, to whom I extend my heart-felt thanks for their stirling work. The South Leinster seems to be well signed and there is no reason to expect it suddenly to disappear and I know for a fact that the Wicklow is excellently maintained, so that I should be able to report that a walker can in fact walk from the south-eastern most point of the country to the capital without once having to ask for directions. Just follow the little yellow man!
My favourite moment of what was, otherwise, a day singuarly lacking in favourite moments, was the discovery of a stone seat built into the outside of a long garden wall, which I passed at around midday, some 8kms past Piltown. This slate seat, easily

broad enough for Stella and I to fit comfortably onto, smiled at us as we passed and even though I had not planned to stop quite then, it seemed somehow churlish not to sit as we were tacitly bidden and to rest with a cup of tea. I love these little signs of compassion and thoughtfulness for passers-by. They shine with the altruistic spirit that conceived of them and brought them into existance. They are empathy made flesh or stone and I am always grateful for them personally, always avail myself of them and am always touched by the affirmation of our goodwill towards each other and in particular to strangers. There was no benefit to the builder of that wall, presumambly the owner of the huse

and grounds behind it, from including a seat on the outside. It cannot have been conceived and built for his or her use. And yet at some time during the building of the wall, the owner will have had the thought, born perhaps by the memory of a similar seat found in a wall somehwere far away, in another country and time perhaps, and on which, weary from his walk or merely stopping to admire a view, he became the temporary beneficiary of another’s largesse, compassion and foresight and vowed one day, if perchance he should ever come to build a wall, to include a seat for passing travellers in it.  And so the seeds of empathy take root in each one of us and are multiplied a thousand times over, as anonymous acts of generousity spur us instinctively to give on, what we have received. So it was with the seat today, so it was with the water cup yesterday. Perhaps it wasn’t such a bad day after all.