Tuesday, April 28th. There has to be something wrong with me, if, on my first real day off from this gruelling walk from coast to shining coast of the Emarld Isle, and after an almost 40 km route march the day before, I should choose to, well, go for a

walk. But we did and what a walk it was too. First off – I was too tired to take much notice of where exactly I had landed and of the surrounding countryside, but on awaking on this crisp, clean, cold but bright sunny morning, the full splendour of the Knockmealdown Mountains, that rose quite literally behind the Ballyboy House B&B was revealed and it was just too much of a temptation not to attempt the closest and highest of the peaks. Also I was aware that the next morning I would be joined by Caroline Casey, one of Ireland’s most prolific and highly profiled social entrepreneurs for a days walk and I was keen 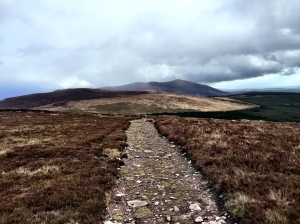 not to have to start searching for the start of the East Munster Way first thing in the morning. After a lengthy and relaxed chat with Breeda, my very athletic, very authentic and quietly autocratic 60-something hostess, who I discovered was a keen hiker and trail walker and who encouraged me to explore the mountains in her backyard, we set off in the morning sunshine, not expecting to be out for too long and certainly not expecting any excitement for the day, other than a few good views.

I think I am going to have to give up expecting things, as everything in life nearly always turns out farcically differently to my well-reasoned 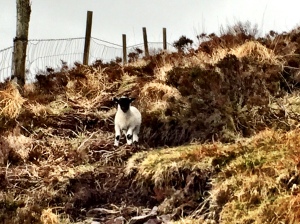 and quite detailed imagination as to how they will play out. To begin with, the sunny morning was just a trap, to get me out of the house, straight out of the stratagems in the chinese epic “The Three Kingdoms”. Hiding behind the Knockmealdowns, where a large battalion of heavily-armed black thunderclouds was waiting until I had travelled just far enough for the “too late to turn around now” feeling to have taken root before ambushing me with the first salvo. This initial downpour had me wrongfooted, I admit, but I did have my rain gear with me (of course) and proceeded to struggle into my waterproofs as the rain came pelting down halfway up the road leading to the Vee (the saddle between the two largest mountains in the group). Hardly had I completed the costume change, but the onslaught stopped and the sun was there again and continued until I had reached the edge of the wooded part of the mountain and emerged onto an open piece of road hich formed a large viewing platform over the enormous stretch of Vale below. 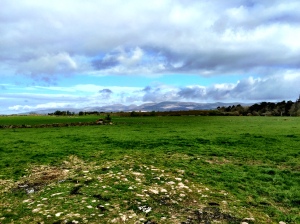 A perfect place for a cup of tea and so backpack was duly unladen and Stella catered for and seat taken. It took about 5 seconds for the rain to come out again. Away went the thermos, away went the packet of biscuits, out came the waterproofs on went the woolly hat and so on – you get the picture. Hardly on and us on our way up the mountain road again, sun came out, dried away the rain and itsy-bitsy spider was climbing up the spout again. Far too warm for waterproofs and off they came again. Just then I discovered the purported reason for my coming up here in the first place – the first waymarker for the East Munster way – and could  (maybe should) have stopped and turned around

there and then. But something kept me going – the lure of a peak? The thought that 6kms didn’t count as a walk, more a trip to the bathroom? On we kept and sure enough, five minutes later, an almighty downpour this time accompanyied by such a cold wind that I had to add a pair of gloves to the costume to stop my hands from freezing any more than they already were. By this time I had changed clothes more times than Liza Minelli at a Las Vegas Review and without any assistance from behind stage and possibly not quite as elegantly, and was getting bored of this routine. Which was fine, as for the next hour the downpouring rain was unbroken, interspersed with snowy bits (not bavarian standard, but passable) until we reached the intersection of the two mountains, the Vee.

Again, at this point I could have chosen the short(er) route back to Clogheen, but I picked up a sign for the alternative Avondhu route that I could have taken yesterday (the long route over the mountains), but couldn’t manage and so decided in the name of completeness to finish the job and walk that section as well.

I am delighted that I did, even though the whole exercise ended up just shy of 35kms and some tough, but glorious walking over the fells with several very steep inclines. All walkable, of course, but not really relaxing. And a full assortment of weather – we had a hail storm which lasted for 20 minutes and came in at us horizontally, we had a little snow, lots of rain and even some sun again as we were making our way off the mountain. It was getting on for five o’clock as we arrived home, soaked through, knackered and again dying for a large pot of tea and a drying out session in front of the fire. All of which we received with good grace from Bernie, our stand-in hostess for the evening, as the mistress was away. 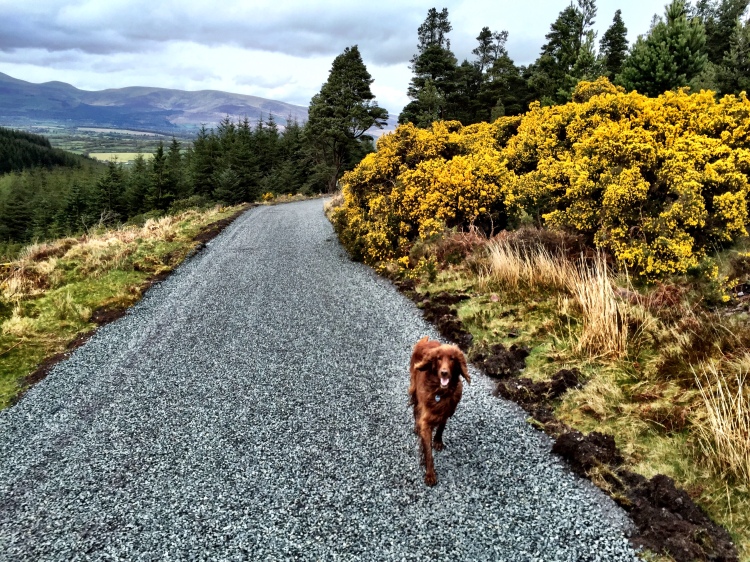 So much for the day of rest – this is an exquisitely beautiful area, ideal for walking, with gigantic views, magnificent mountains on both sides of the valley, the Knockmealdowns on the south side and their more famous cousins the Galtees on the northern flank. Definitely come-back country.