Too full at 0600 on Monday morning from last night’s “simple irish supper”, I skipped breakfast and quickly packed the last pieces of my kit that I had not been able to stow away the night before (most of it actually). I have become a dab hand at packing my backpack quickly and efficiently and have figured out the best way of arranging the pieces so as to minimise the waste of space and to distribute the weight evenly. 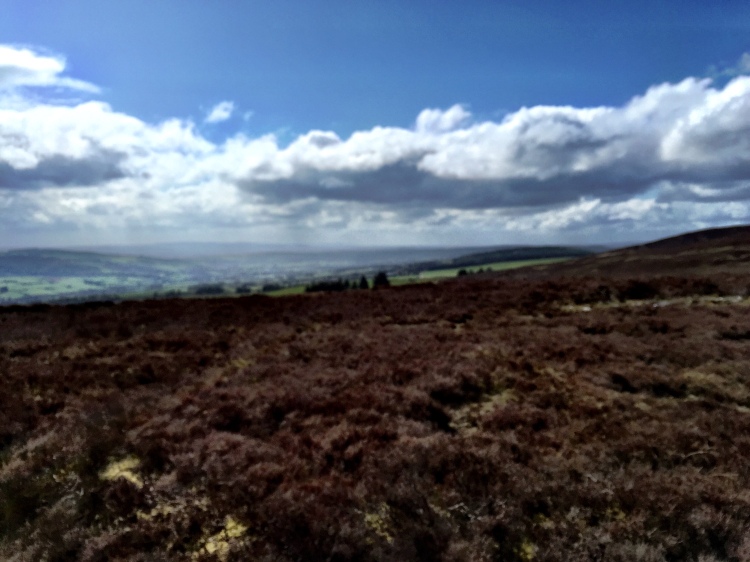 I had made the decision the day before, that I was going to take the final 38km section of the Avondhu Way to Clogheen (pronounced Claheen), in Tipperary in one go and determined to set off at 0700 in order to break the back of the trip before noon. Which we did and a very intense day it was too. We have passed decisively from sheep to dairy cattle country now and we were followed on almost every lane by curious young herds of cows, which Stella found very disconcerting, especially when they began stalking her, starting slowly at first at one corner of the field but increasing in speed as she pulled away from the lowing, stumbling, inquisitive herds, falling over themselves in their rush to get as close to the fence

and us as possible. You know you have been on  the road a long time when you start talking to cows and mediating between them and your dog and not finding that fact at all curious.

The way out of Fermoy is on metalled roads for…miles. We wandered along main streets, past housing estates, on back lanes, back onto main roads, now contending with the morning’s rush hour traffic – admittedly this is not Shanghai, but nonetheless a lot more traffic than I have become accustomed to – even onto a motorway roundabout and slip road (with a sign pointing to Dublin which on that cold Monday morning brought on a twinge of homesickness, along with the thought that approx. 120 minutes away was home). 8,5 km later we turned off the country road into the Glashalston Reserve and the prettiest part of the days walk, at least for the first half. We walked through a beautiful woodland park,

following the mellifluous babbling of a stream gradually uphill, climbing steadily until we were on more open forest tracks with glimpses of the open countryside and hills through the spaces in the plantations. We spent a great deal of the middle part of the day on seemingly endless forest tracks which ran for kilometres in a straight line, before arriving at a junction at which we would turn left or right before marching for another interminable stretch along an identical path. I knew from studying the maps over the last days that the final section would be in a mountainous area and so I had a watchful eye on the hills in question from the moment we left Fermoy. This was the geography we were making a beeline for and as imposing as they had seemed from 30 kilometres distance, the more manageable they appeared to be as we came closer.

would then take us down into Clogheen and Ballyboy House B&B, some 5, rest. 7,5 km away at the foot of the mountains in the sumptuous green valley below. The last two hours and 10 km to Crow Hill seemed to never want to end and by the time we hit the small mountain carpark I had 38km on the tracker and an average speed of just over 5,0 km/h. We had encountered every type of weather imaginable: rain (lots of it), sunshine, sleet, icy winds, even snow for a three minute interlude and a spot of hail and had almost every type of ground underfoot, from asphalt, through bog and fen track, forest path, broken stone ways (a peculiarity of Irish Trails, the purpose of which I have yet to fathom. These ankle breaking routes heaped with small stones and rocks are good for …nothing, except, possibly, ensuring that walkers do not hurt themselves by moving too quickly. I smell an EU

health & Safety Directive lurking somewhere in the background.).
Late in the afternoon, ten and a half hours of almost non-stop walking with a full pack later, Stella and I arrived at Ballyboy House, a very idiosyncratic and characterful B&B just outside (and on the wrong side) of Clogheen, owned and run by Breeda and John, wet, cold, hungry, our feet pounding and well-pleased with our efforts for the day. Although I didn’t get the room with a bath which I had been dreaming of all day, we were treated to a pot of tea and fresh scones in front of roaring fire, in front of which, lying on the floor Stella and I duly fell asleep, her head draped over my lap.