Here’s the thing about walking: you own your trail and it becomes a part of you. More so than crossing country in any other way, you become your trail. Whether you cross terrain on a moutain bike, eat up road miles on a racer, ski across country – whichever of those you choose – you are never quite as 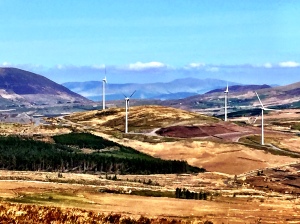 much a part of the earth that you tread on. You earn your trail and months and even years later you can replay long sections of walks back on your inner YouTube. You remember stiles and farmyards, long tramps up difficult hills, views that have time to embed themselves on your frontal cortex just from staring at them for a few hours as you cross the countryside. You build relationships with waypoints – the windmills in the distance, that copse of firs, a cross on a summit, a farmhouse, a church spire and slowly the distant object grows and approaches and becomes present, is passed and then released, to be replaced

with a new mental marker. But these waypoints, so hard won, impress themselves  indelibly into your memory bank and can be recalled, almost at will, even after they have outlived their temporary usefulness. And walking is conducted entirely in an aerobic pulse range: you are present throughout. No pumping up the heart beat rate to 150 0r 170 a minute on a long slope as you would with your mountain bike, no phenomenal rush of speed as you might experience on your skis on a long downhill slope, both absorbing your full concentration. Walk and you take every step you take, up or downhill, on the flat – one heart beat, one rhythm. You own your trail.

Or it owns you – today was my first day back on the trail again after a year’s pause and the trail got the better of me on our first re-encounter. First off – it could not have been a more beautiful start to this trip. A cloudless sky, breathtaking views of the Kerry mountains ahead of me as I left Waterville at 0730 and a cool breeze as I headed up the road away from the village, the calm Atlantic at my back. The Kerry Way is well signed (mostly) and, in case I needed it, my new toy, a Garmin Montana 650T GPS device, fully loaded with all the relevant OS Maps for the next month proved phenomenally accurate and allowed me to hug the route to the nearest metre, even without the signage. Of which more later. As I climbed from the road through the first fields, up towards the distant peak, the drama of this landscape slowly revealed itself. Glistering lakelets in the morning sun at the foot of huddles of individual hills and mountains, an endless congregation of them, looking like nothing so much as the Kingdom of Gondor which emanate a sense of impenetrability, an endless maze of mountains in the distance, truly a magical panorama. 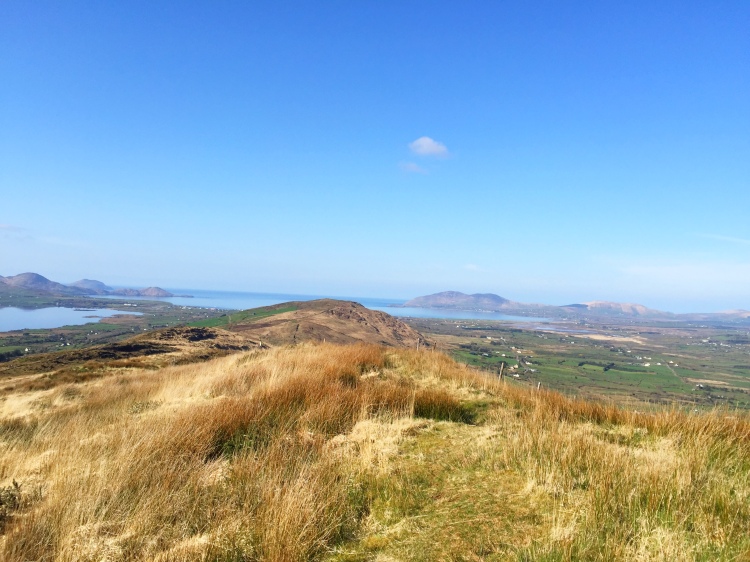 The route, for all it’s beauty, proved tough walking, more suited to Hobbit feet than mere mortal equipment. The ground is either up or down – no respite except for a short stretch on the tarmac road between the two main valleys through which the Kerry Way passes. The ground is very wet and mashed up from the sheep hooves, with whom walkers share this way. This makes for difficult walking and slowed my down considerably, taking my average speed from a planned 5km/h to 3,1km/h which on a 28km trip truns a 6 hour hike into a 10 hour one – more than I had budgeted for on this first day. The down stretches are doubly difficult as the Way wends its way down testing – albeit short – almost vertical rocky stretches which require a mixture of scrambling and climbing to get down. Fully laden with an 17kg backpack this is challenging and almost impossible without a extendable walking pole. This, however, regularly sinks 6 to 10 inches into the mud and waterlogged ground, making progress difficult and playing havoc with my feet.

The temperatures quickly shot up to 25ºC and, magnificent as it was, to be walking under a summer sky, the combination of testing ground under foot and a relentless beating from the sun, began to take their toll, as the afternoon along with the trail rolled on in a never ending series of long undulations. I had to stop off at a small village school and interrupt their afternoon class to ask if I could refill my water bottle, much to the amusement of both the class and their teacher, before heading up

the last of the hills before dropping down to the road which would then take me to Cahersiveen. By the time I came off the top, 9 hours after setting off in the morning my feet and my back were screaming at me and my hopes of enjoying a leisurely afternoon in the village had long been abandoned. All I now wanted to do was to get to the hotel and have a bath. Just at that moment my GPS battery gave up. I wasn’t concerned at all – after all I was off the mountain and only a km away from the main road, so no worries there. Only it didn’t work out that way – the signage, along with the path, disappeared in the middle of a field and I had no choice but to push on regardless. By this time I had been joined by a fellow hiker, who I had come across trying to make sense of the signage in the previous field and together we battled our way through a swampy

field in which the intensity of the gorse bushes and brambles was increasing with every step we took. We ended up hacking our way through thick and vicious brambles that tore and ripped at my bare arms and legs and by the time we had found our way back to a tarmac road, we had lost an hour and my clothes were covered in blood and my legs looked like a sketch for a Cy Twombly painting. Also, my energy levels were very low and the thought of tramping another 5kms on the main Ring of Kerry road to Cahersiveen was too much. So we did what all good hikers in such situations do – we called the hotel and asked them to send us a taxi to pick us up. That turned out to be the best decision of the day and Maureen – our taxi driver – deposited us in the middle of town much to the delight of my feet and the rest of my exhausted body.

I am now going shamelessly to plug QC Townhouse: Kate, the owner and Megs, her manager in the restaurant were absolutely briliant, pampering me from the moment I arrived and ensuring that all my needs were

expertly catered for. TCP and wound salve for my lacerations, a washing machine for my mud-caked (detachable) trouser bottoms and socks, a hot bath, and at the end of it all, when I was restored a fantastic dinner in the QC Restaurant. Kate was brilliant and I cant thank them enough. The rooms are generous and very well equipped, they are very well organised and I will be hard put to find hospitality at this friendly professional level on the route ahead.

So I have earned this section of the trail – it is definitely mine, even if it looked a felt the other way around during the final hours of the day. 1 day down, 27 to go.

2 thoughts on “The Thing about Walking”