The last 24 hours have had a slightly surreal feel to them as the time before the start of the walk slowly metamorphoses into the time of the walk. Imaginings start slowly to transform themselves into facts and tangible realities. Lists with necessary items of equipment turn into shopping expeditions and then into bags and boxes of kit, collecting in the boot room underneath the backpack, which hangs deflated and shapeless on its peg on the wall, its pockets, zips and openings gaping expectantly, waiting to be fed and stuffed. I catch myself noticing little comforts – walking to a full fridge, waking up in my own bed, choosing what to wear from a full cupboard – and reflecting on the fact that in two days, next week, in three and four weeks, I will have accustomed myself to living out of a 50 litre rucksack, the largest portion of which will be taken up with a tent, cooking equipment and a sleeping bag, followed by dog food, my food and then protective clothing. Oh and not to forget the cables and the plasters. 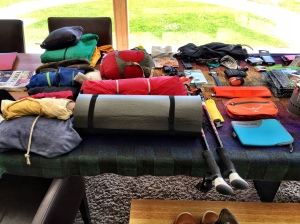 Today was taken up with packing, clearing the decks and communicating now that the Facebook page (One man, a dog and a Changemaker) is online, the donation webpage under www.betterplace.org is fully functional and my blog site has been tarted up for the occasion (thank you, Aline for all the above!). The sun is still high in the sky on a bright blue spring afternoon and my desk is clear, my rucksack is packed after three attempts at stowing all my kit and weighs in at just under 17kgs (which will turn into 18kgs when the flasks are full). I have upped the level of professionalism since my last trip along Offa’s Dyke considerably and now have some wonderful pieces of equipment (like a compression bag, which reduces my sleeping bag to a quarter of its natural size and some lightweight waterproof stowing bags into which almost all my clothes and the cables have magically disappeared, oh, and an absolutely brilliant 10 litre water bucket which folds into a minute package of less than 2cm). I will be posting a complete list of my equipment with suppliers (an idea I gratefully nicked from Myla Fay’s engaging Blog site) on the road, with comments on what works and what doesn’t and what I could really do with next time (like a sherpa or a donkey to share the load). 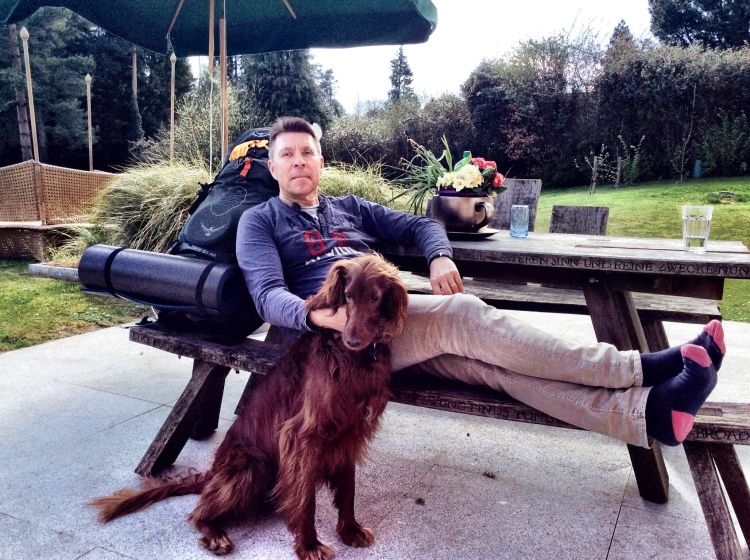 I do have some big thank-yous at this early stage of the adventure (which is the last stage of the three month preparatory phase): Firstly to Britta for making it possible for me to bugger off for a month so soon after our move to Dublin, leaving her to cope with school runs, parent teacher conferences, summer holiday planning and teething troubles on her own. Thanks love – you’re the best. Thank you also to Aline, from my team at Buchanan in Munich for doing all leg work on the sites and the never giving up chasing me for copy, input and decisions. A big thank you to Serena and Rebecca at Ashoka for not only pumping this little project up with a huge amount of enthusiasm and turning it into so much more than just a walk – albeit a rather long one – but also for welcoming me to Dublin and allowing me to become part of their organisation and community. You are true stars and irrespective of the outcome, just getting this far has been such fun. Thank you as well to my partners in Munich for their forebearance and giving me the space to go on this walk with support and encouragement. Finally to all of those of my friends who have offered their support and sponsorship, my thanks – it is hugely motivating to read your comments and feedback and to receive your donation pledges for my chosen cause – thank you (and keep it up).

2 thoughts on “Getting started”